These are caterpillars of moths and butterflies. In particular, the Small Mottled Willow Moth (Spodoptera exigua) and Silvery Moth (Autographa gamma) larvae do the most damage.

Voracious and mobile, the Silvery Moth caterpillar feeds at night and hides during the day. At its largest it can attack young leaves and the plant bulb.

The use of pheromone traps will give a warning when the adults are arriving on the wing, in time for precautionary chemical control measures which take the form of baited traps.

Biological methods work well in the case of the Small Mottled Willow Moth.

Noctuid moths are insects of the order Lepidoptera (butterflies and moths). These all have two pairs of membranous wings and a thick, furry body. Their long proboscis is useful for sucking their sustenance, and they fly quickly. Both moths and larvae are essentially active during the night.

Within this order, these moths belong to the family Noctuidae. This includes a group of moths which cause a very great deal of harm to many crops, and it is the voracious larvae (caterpillars) which do the damage.

We are concerned here with leaf-eating noctuids.

> Life-cycle of butterflies and moths in general

Moths and butterflies have 4 stages of development:

It is only the caterpillar which harms plants; but they are voracious feeders, and get around fast. They have a head with highly developed chewing mouth parts, and can be between 2 and 4 mm long. They grow without stopping right up to the pupa stage and are always feeding heavily except when shedding a skin, when there is a temporary pause.

Once fully grown the caterpillar turns into a pupa, from which the adult emerges.

This armyworm (Spodoptera exigua) is the main culprit when it comes to cyclamen damage.

It originates in the tropics and subtropics, where it feeds on a multitude of plant hosts. First appearance in Europe was in the Netherlands in 1976 following an import of infested plants from Florida (Chrysanthemum cuttings).

The caterpillars (or armyworms) are voracious feeders and can get through a great deal of plant material in a short time; the food they eat depends on their stage of development, but the damage they cause harms the plant a great deal and greatly reduces its market value. They feed mainly at night and stay hidden by day.

The young caterpillars eat only the underside of leaves; the older ones make holes in the leaves and also set upon flowers, flower buds and growing tips: they foul the flowers as well with their excreta; and they can get at the bulb by its upper surface.

Other noctuids also cause damage to cyclamen plants. 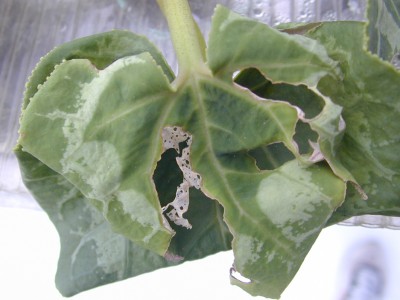 Damage on leave caused by caterpillars 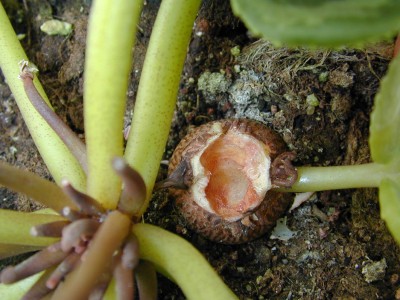 Bulb and buds eaten by caterpillars

The Silvery Moth is a migrant moth which leaves southern Europe in summer for more northerly parts, returning in November.

This pest is to be found on brassica crops, but can also infest flower plants such as cyclamen.

There are two generations each year. From June onwards the adult visitors arrive and mate.

The life cycle takes a little less than one month. The second generation appears in August, and the caterpillars and pupae of these will over-winter in heated glasshouses.

They are particularly fond of stalks and will bite through leaf stems. 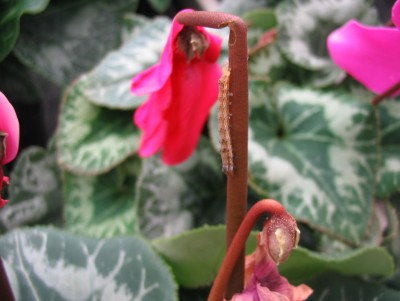 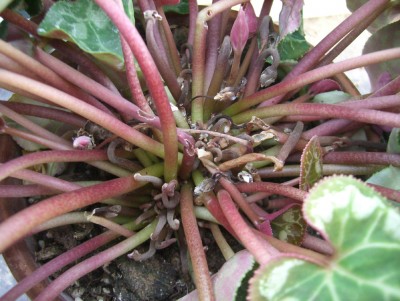 Damage in heart of plant caused by Duponchelia

This moth also comes from the tropics and subtropics and has been present in French glasshouses since 1973; it may be found on cyclamen. Under glass a number of generations may overlap.

Widespread in Europe and of Eurasian origin, the Bright-line Brown-eyes Moth is a fairly common pest of herbaceous plants, especially ornamentals under glass.

Outdoors, the moths appear from late May onwards, but in a heated glasshouse they may be seen as early as January.

The caterpillars are generally at their most numerous from July to September.

Under glass there may be up to 3 generations in a year.

The young caterpillars do little harm, only gnawing the underside of leaves, producing an intaglio effect. Older caterpillars, on the other hand, consume the whole organ. Leaves, stalks and also flowers may be severely damaged.

This is a native European butterfly, and a common pest of ornamental herbaceous plants. In France there may be 2 or 3 generations a year. The adults appear in May or June.

THIS IS NOT AN EXHAUSTIVE LIST. OTHER NOCTUIDS MAY BE FOUND ON CYCLAMEN, EVEN THOUGH THIS IS NOT THEIR PRIMARY HOST (for instance, Turnip Moth, Agrostis segetum)

These are moths that fly, usually by night, and can therefore lay eggs in many spots at some distance from each other.

The caterpillars also can cover fairly large distances; they have normal walking capabilities and can cause damage elsewhere than at the original site of infestation.

Current practices, the use of selective controls and the less frequent recourse to soil disinfecting, have resulted in more widespread appearances by these pests among cultivated plants.

Caterpillars can be picked off by hand while there are still few enough of them. Additionally, steam disinfecting of soil can be a useful way of destroying any pupae that may be there.

UV lamp traps (heat source) are useful for estimating the size of the population and can provide some measure of control of adult numbers, which reduces egg laying.

Outdoor pheromone traps (sexual trapping) permit detection of flights, and with good forewarning chemical methods of control can be deployed at the best moment. These traps are available for various noctuids (Mamestra oleracea, Chrysodeixes chalcites,...), but not for the Small Mottled Willow Moth.

Good results are obtained against the Small Mottled Willow Moth with the virus Spod-X GH.

This is a polyhedric virus of the Baculovirus family: it is selective for the Small Mottled Willow Moth, and is therefore not toxic for any other organism (insect, animal or human). It infects the larval stage, and young caterpillars are particularly susceptible. 6 days after treatment the disease develops and the caterpillar dies.

The treatment suits cyclamen. It is used in some parts of Holland, though it does not figure on the province’s Index of plant medication, nor the French (1997).

Treatment is recommended immediately the first butterfly appears in the glasshouse or outside; ensure that the underside of the leaves is well wetted (treatment should be repeated at least once a week for 3 weeks). For dosage, see the manufacturer’s instructions.

Bacillus thuringiensis var. kurstaki may be used for biological control of many lepidoptera, including noctuids. The bacterium contains a pro-toxin of crystalline structure. Once the caterpillar ingests plant matter where the bacterium is present, the enzymes in its gut release the toxin. The bacterium is therefore only effective on the larvae, so it is important to pick the right moment to act. Some hours after ingestion, the caterpillar stops feeding, so damage is limited; the caterpillar then starves to death (by general metabolic disturbance and paralysis of mouth parts) in 2 to 5 days.

There are a number of varieties of the bacterium, each with a toxin that acts specifically on certain insects. This is a method which does no harm to other, untargeted insects such as the beneficial ones.

This bacterium was the very first biological insecticide to be used, back in the 1960s.

There are many commercial preparations, which are to be used in accordance with the manufacturer’s recommendation.

The quantity of active ingredient that the caterpillar needs to absorb depends on the plant concerned and on the size of the caterpillar; so it is important to understand and recognise the various stages of development.

In France, this technique is little used on cyclamen because climatic conditions are not humid enough.

It is important to realise also that the Small Mottled Willow Moth (Spodoptera exigua) is unaffected by these bacterial products.

3 > With natural predators of the caterpillars

Introduction of Trichogramma, an egg parasite, can reduce caterpillar populations: these lay their eggs inside a noctuid’s egg and it develops there; this also stops the caterpillars hatching. On the other hand, it does nothing to the caterpillars already present.

Chemical control is a tricky business. At the time of its introduction into Europe the Small Mottled Willow Moth already had some resistance to certain insecticides, and the problem has got worse since.

The young caterpillars are more susceptible to the active ingredients of chemical controls, which emphasises the importance of timely intervention.