Since the 1980s, when the Californian Thrips arrived in Europe, virus diseases have been the worst enemy of cyclamen, in particular the TSWV and INSV.

The incubation period before symptoms begin to appear is around two months, and even then these symptoms are often ill-defined (spots, discoloration and/or leaf shrinkage).

Since there is no means of cure, priority should be given to such preventive measures as eradicating insect vectors, leaving gaps to prevent contamination, and checking of nearby plants.

Ornamental plants include species from the most diverse botanical families. There are nearly 300 of them that are susceptible to virus attack, and the list of different viruses comes to some 260.

Viruses cannot be seen with the naked eye and, unlike other plant pathogens, they have no life activity outside the plant. They make use of host cells’ mechanisms for their own reproduction, and can therefore survive and multiply only inside a living cell. As it takes over the cell’s machinery in the interests of its own foreign genetic information, the virus causes disease in the plant. Symptoms vary widely, depending both on the strain of virus and also on the variety of the host plant.

An infected plant cannot rid itself of the virus, for it has no means of defence.

These virus are (mainly) classified in one or other of two groups: polyphagous viruses, which can attack a large range of host plants, and more specific ones, which can only develop in a very restricted range of hosts. 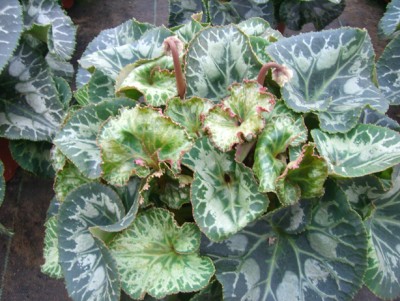 Cyclamen infected by a virus in the young leaves 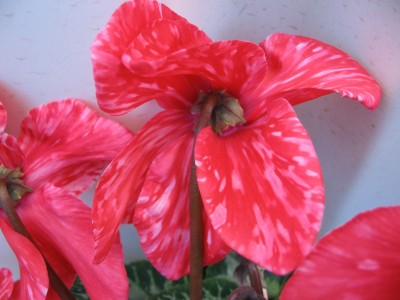 Cyclamen flower infected by a virus

1 > An introduction to the virus

This virus is one of the Tospovirus group, a particulate virus. Under the electronic microscope the viral particles have a spherical appearance and are of the order of 70 to 120 nm in diameter, composed of a single strand of RNA covered with a knobbly membrane. The virus had been known in Europe earlier (1932) but had disappeared and was reintroduced in France with the arrival in 1986 of Thrips frankliniella occidentalis, one of its most effective vectors. It is a serious threat to many vegetable and flower crops. High temperatures favour its multiplication within a plant.

Over 500 species play host to this virus, including ornamentals, market vegetables, and weeds, and the cyclamen is one of them. This is by far the worst virus so far as cyclamen are concerned.

It constitutes a major problem in horticulture.

TSWV is not transmitted in the seed. Contamination is only due to thrips, insects (Thysanoptera) of the family Thripidae. Only 6 species can carry the virus, and only two of these are present in France: Thrips tabaci (Onion Thrips) and Thrips frankliniella occidentalis (Californian, or Western Flower Thrips). Other vector species may remain to be discovered. These different species also have variants (ecotypes) that are not capable of transmitting the virus.

The virus disappeared from Europe in the 1940s, but has come back in many regions in the last few years thanks to the increase in thrips, especially the Californian thrips T. frankliniella occidentalis.This made its appearance in Europe with the import of some infested cuttings, and it is capable of transmitting TSWV from plant to plant as it feeds. So is the Onion Thrips. This virus now has a world-wide distribution.

The main agent in the transmission process is the thrips larva. When it feeds, it injects its saliva into the plant cell in order to cause lysis of the cell and make its contents available: this hydrolysed product it then sucks up. If the plant fed on is infected with TSWV, then the larva can become a carrier: the virus is taken in through the salivary pump, passes through the gut wall and is then carried by the haemolymph to the salivary glands. For the larva to be contaminated, the feeding period has to last at least fifteen minutes or so. Then, after period of latency of a minimum of 4 days (the average is 11), the larva becomes capable of transmitting the virus in its saliva. The virus itself multiplies inside the larva, as it develops. The greatest rate of TSWV transmission is 3 to 4 weeks after ingestion, which is the time taken by the virus in its route through the larva’s body to the salivary glands: often the virus is most potent once the larva has metamorphosed. An adult thrips that has developed from a carrier larva will be able to transmit the viral infection throughout its life. The transmission mode is persistent (the virus is known as ‘circulating’). The adults cannot, on the other hand, become carriers by their own ingestion of contaminated material; nor is this virus transmitted to the eggs.

Incubation of the virus in the plant takes around 2 months. TSWV does not necessarily attack the plant all over; but all the plants’ cells, apart from the seeds and the meristem (growth) tissue, are susceptible.

Symptoms and damage are extremely variable from species to species and may take most untypical forms; the viral attack may be so bad as to destroy the infected plant utterly.

The most common symptoms are dwarfism, marbling, leaf mosaic patterns due to cell death, discoloration and stains. In the case of cyclamen the first symptoms are the appearance of a mosaic of dead cells (necrosis) and spots on the leaves and brown signs of cell death on ribs, sometimes mistaken for signs of scorching. The leaves perish, often with yellowing. Viral attack is therefore quite hard to diagnose, especially when it is a matter of distinguishing between this virus and the Impatiens Necrotic Spot Virus INSV. The flowers also may be deformed and stained (often a sign of thrips infestation).

When immature leaves are affected, the necrotic zones do not grow with the others and the leaf is deformed.

The earlier the stage of growth at which infection occurs, the greater the damage. The visibility of symptoms also varies with climatic conditions, in particular the temperature. 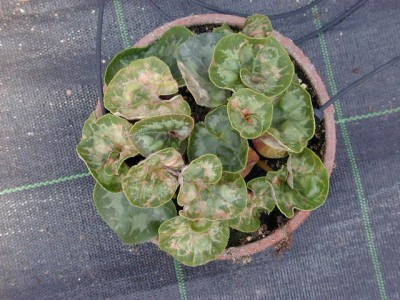 Part of plant infected by TSWV

Cucumber Mosaic Virus has a wide range of host plants: it infects around one hundred species of ornamental plant, as well as some 320 market crops and weed species. It is one of the Cucumovirus group whose single-strand RNA is contained in a protein shell or capsid.

It is transmitted by aphides in the non-persistent mode. When the aphis pricks a virus-infected plant with its stylet, for instance in the course of a sap-evaluation quest, the virus remains caught on the stylet, and does not go through the gut wall. Hence the aphis can carry the infection immediately, but loses its infective power quite quickly. This means that there is little direct relation between virus and vector: aphides of very different species can transmit the virus in passing, pricking first an infected plant, then a healthy one, whether or not the plants are of a species that naturally plays host to those aphides: pricks made in the course of searching for a suitable host plant are sufficient for infection.

This virus may be transmitted by a very large variety of aphides: the National Agricultural Research Institute at Montfavet has recorded 31 species as vectors, most infectious among which was Aphis gossypii, the Cotton Aphis.

The virus causes pigmentation anomalies (discoloration due to deficiencies in chlorophyll pigments). These alterations only affect certain tracts of cells, which is what gives the tissue its ‘mosaic’ appearance.

These mosaic zones are also sometimes accompanied by blistering, asymmetry of the leaf, and shrinkage of the leaf lamina.

- by means of the enzyme-linked immunoabsorbent assay (ELISA)

This is a virus from the Tobamovirus group (single-strand RNA, without coat). It causes mosaic patterns on leaves. Under the electron microscope it looks like small straight rods 300 nm x 18 nm. In plant tissue, TMV is highly stable and very concentrated.

It is easily transmitted by physical contact, but also by vectors such as the Cotton Aphis (Aphis gossypii). The main means of its persistence are the soil, and seeds. A number of strains have been described, differing in their range of host plants and in the severity of their symptoms.

Potato X virus is one of the Potexvirus group, a single strand of RNA, without coat. It causes cyclamen leaves to curl up.

It is transmitted by physical contact, and may lie latent for many months before expressing.

This belongs to the Tospovirus group, like the TSWV. The INSV is only transmitted, so far as we know at present, by Thrips (including Thrips frankliniella occidentalis). The incubation period within the plant is 2 months. In cyclamen, as opposed to other plants, its symptoms are fairly typical: outward signs are concentric ring-shaped stains of cell death, chestnut or yellow in colour, on the leaves, flower stalks and leafstalks. The roots are not attacked. As with TSWV, when immature leaves are affected, the necrotic zones do not grow along with the others, and leaf deformity results. Flowers also can be misshapen, and the tuber can become elongated, while stripes may be seen in the vascular tissue. 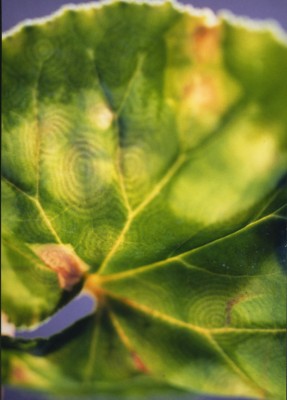 Virus infections cannot be cured. At present we know of no effective virus-killing molecule which does not also poison plants. Any plant infected is irretrievably doomed, both by the degradation of quality which the effects entail, and by the danger it represents of providing a reservoir of infection for the other, hitherto healthy plants of the glasshouse. Since there is no cure, means of control must depend on prevention and the destruction of these virus’ vectors.

For the present the watchword is vigilance, and the best weapon is skill in timely recognition of symptoms, allowing a swift response.

2 > Destruction of the insect vectors of viruses

The Californian (or Western Flower) Thrips and the Onion Thrips are the two cyclamen pests which transmit viruses. Containment of the population of these, or their elimination, will be so much ground gained against the danger of viral infection. But post-hoc chemical measures against these pests are not yet fully effective (see the section on Thrips), in particular against Thrips frankliniella occidentalis. Biological control holds out a fair prospect of success.

The elimination and prevention of the airborne attacks of thrips are of fundamental importance.