Pythium debaryanum attacks cyclamen especially at seed or seedling stage, either before or after the seedlings appear. The stalk of an afflicted seedling flops; finally they rot away entirely. The fungus spreads outwards in a circle.

There are chemical controls, and also precautionary measures for dealing with this disease, such as:

> Pythium debaryanum : cause of soft rot and damping off of seedlings

Fungi of the Pythium genus are Phycomycetes, and aseptate (their mycelium does not have partition walls). They can only live on plants, and their development takes place inside the plant tissues. The mycelium grows between the cells and puts out suckers known as ‘haustoria’ which invade the cells for food. Pythium belongs to the family Pythiaceae in the order Peronosporales of the class Oomycetes: primitive fungi which all need liquid water for their development (water on the surface of the ground). They can reproduce sexually (in the form of oospores), as well as asexually.

The Pythiaceae are considered opportunist parasites, preying on weakness and taking advantage of conditions which are not ideal for the plant. They are almost always found in the root system.

> The life cycle of the fungus

The cycle of this fungus comprises two stages. The first is one of sexual reproduction with the formation of oospores which ensure that the organism is preserved at the end of the cycle and when conditions are hostile. These oospores are well protected inside their thick coat, and are the form in which the fungus awaits the return of conditions more conducive to its development. The other stage, which involves asexual reproduction, is that which ensures the spread, growth and development of the disease organism.

The oospores can survive in the ground, inside plant tissues, in the water used for watering, and in the propagation materials (boxes, trays and seed-pots....). When conditions are favourable these resistant forms germinate, putting out mycelium. On this, at the tip of some of the hyphae, form vesicles (conidia, the vehicles of asexual reproduction). When humidity is low, these germinate directly into a thread of mycelium; in more humid conditions, the conidia develop into a sporangium inside which zoospores form, each with two flagella.

It helps to understand that as a general rule these fungal forms, zoospores, conidia and mycelium, have only a short life.

These spores are mobile in a water medium; they move around by swimming in the drops of water on surfaces. When they come into contact with the collar of the plant they cease to move, lose their flagella and generate mycelium, which penetrates the plant’s tissues at this height. This primary infestation is the first stage in the life cycle of the fungus; after incubation and the appearance of symptoms the fungus blooms, producing asexual reproductive spores, and the cycle continues. These conidia are the cause of a secondary spread of the disease.

Pythium produces pectinolytic enzymes (depolymerase, protopectinase) which enable the disease organism to get inside the plant.

The symptoms are observed in seeds and seedlings and in small plants on pricking out.

In the case of seeds the fungus can attack these before germination or later as the radicle and shoot are emerging and before they appear above ground. In this case the fungus is lethal, and an attack produces a failure of a sowing to appear. (Rotting in the ground).

In the case of seedlings and young plants, an attack shows up first in the roots, and then displays a glassy rot, chestnut-coloured and wet, at the level of the collar and the infant tuber. The tissue becomes disorganised, loses its firmness and takes on a watery look. The young stalk is weakened and flops, bringing down the whole of the above-ground part of the plant. At this stage it is known as droop, or damping-off disease of seedlings. The disease may go so far as to make the plants literally dissolve and disappear from the surface of the growing medium; so it is also referred to as seedling melt (post-apparition melt).

Larger plants can get over an attack thanks to their growth; the symptoms they exhibit are withering or yellowing of a leaf or a few leaves.

Misdiagnoses are possible: Rhizoctonia and Pythium produce very similar damage. It is hard in practice to be sure which of these fungi is the cause of the trouble. 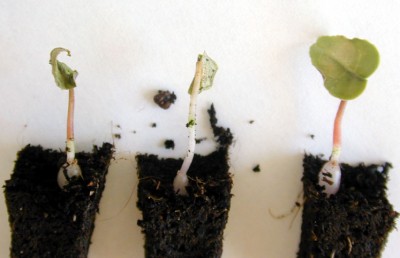 > How the disease spreads

The main carrier of this disease is water. The risk of accidental pollution is very different depending on where the water comes from. In the Mediterranean region the vicissitudes of rainfall mean that the water table can suddenly rise and fall, which can result in pollution of some surface supplies.

There are a number of factors which can give rise to the onset of an infection process: average temperature around 15ºC (59ºF) to 20ºC (68ºF); high humidity with water drops on surfaces (waterlogging or anaerobic conditions at root level); soil high in nitrate content; or a difficult germination.

Pythium attack is discouraged, then, by good growing practices; but there can be temporary lapses, which are the more serious because this plant takes a long time growing. Once primed, Pythium keeps on pumping: the first plants with disease-affected roots will get too much water, compared normal ones, and the balance is still further tipped in the disease’s favour.

What is needed is therefore:

There is no biological control method at present on the market. Some writers recommend the inoculation of seed with spores of Penicillium sp. or Trichoderma viride, which are also fungi but hostile to damping-off disease ones.

There are a number of active ingredients which effectively counter this disease organism. Depending on their properties, they are used either as a means of disinfecting the ground, or on the plant, or on equipment.