Cylindrocarpon Radicicola and Thielaviopsis Basicola are two soil fungi often found together, which attack cyclamen at all stages. They cause a slowing of growth and flowering.

Cylindrocarpon causes symptoms in the plant above ground: rotting of mature leaves and cell death in the bulb.

They develop in airless conditions: poor drainage, excessive watering, composts packed down too hard,&c. They appear most often in the winter, with the inadequate sunlight.

Chemical control is not easy.

Growers are familiar with two fungi which rot the roots and tuber of cyclamen. They are two soil fungi, Thielaviopsis Basicola (syn. Chalara elegans) and Cylindrocarpon Radicicola (syn. C.destructans). The latter is in fact the Imperfect (asexual) form of Nectria radicicola; the sexual form is only exceptionally found.

These two fungi are usually found together. Most often, they cause a definite slowing of the plant’s growth; they retard flowering, and they make the cyclamen considerably less vigorous without actually killing it.

This fungus is in the Tuberculariaceae family in the order Moniliales (like Fusarium), and the sub-division Adelomycetes (septate fungi without sexual reproduction). It corresponds to the Perfect form Nectria radicicola, which is in the Nectriaceae family of the class Ascomycetes.

Cylindrocarpon is a parasitic soil fungus. In the absence of plant tissue it is capable of living in the soil as a saprophyte, feeding on dead organic matter. It grows best in a temperature of 20ºC (68ºF) to 21ºC (70ºF); it can survive in the soil in the form of chlamydospores and sclerotia. It is common in alkaline soils (pH>7) and anaerobic conditions.

This fungus attacks both young and adult plants; the site of attack is where the fungus happens to be, but in general it affects the plant’s main roots as well as the tuber and the base of leaf and flower stalks.

The fungus does not get inside the plant’s vessels but colonises the tissues from the outside inwards. The root tips are the first parts affected and the attack spreads from there.

The affected roots rot, and the larger ones often break off under the tuber; there is a danger that the plant may become detached in this way and fall over. Sometimes the plant reacts to the attack by putting out new roots, giving the whole a rather bushy appearance. Young tubers often show rounded patches of necrosis (cell death): these are brownish and extend well into the tissues. The tubers may also show a sort of fissuring, and in the cracks a whitish mycelium may be seen.

At the base of the leafstalks small elongated chestnut-coloured patches appear, slightly depressed: this is a dry rot. As the fungus invades the stalks it makes them more fragile, so that they twist and break off, and the leaves may go yellow, wither and fall, making the cyclamen look a bit like a tussock. The older leaves are the first affected, and show a black rot in their centres and on the stalks. Moreover if conditions are humid the fungus may produce spores (forming fruiting bodies on these cankers).

Infected plans of course provide an important source of further infection. Irrigation water, breezes, and various operations involving handling the plants can spread the infection; so can insects and mites. 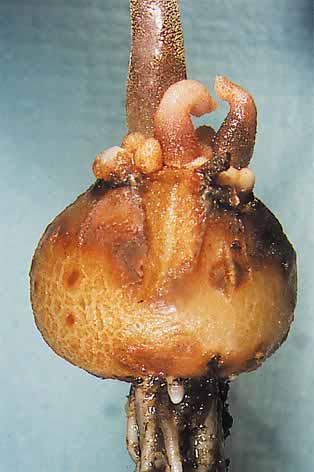 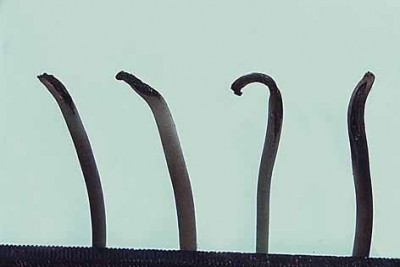 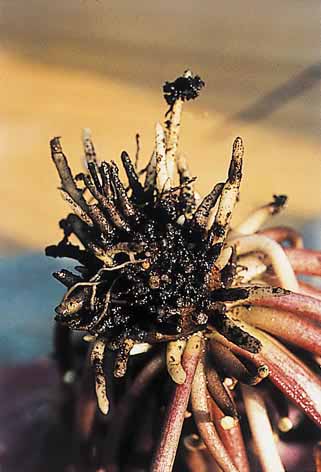 This fungus also belongs to the order Moniliales of the sub-division Adelomycetes; but it is in the family Dematiaceae. There is no sexual phase.

It is very common in soils rich in humus; it is an opportunistic parasite, preying on weak plants, and attacks only the roots of the cyclamen, usually the laterals of the main root. The mycelium penetrates between cells and reaches the conductive tissue. Afflicted plants show brownish patches, which correspond to incipient rot in the roots. When this fungus is infesting the roots the result is a yellowing and then withering of the leaves. Young plants that are infected have their growth inhibited. Infected roots are covered with chlamydospores (resting spores with a thick wall, whose function is to ensure the fungus’ survival). The fungus grows best between 13ºC (55ºF) and 18ºC (64ºF), and enjoys very damp soil; it is inhibited by high temperatures and acid (pH<5.5) soils.

As the fungus only attacks roots, it is drainage water from the pots that is its most important means of spreading.

The first thing to make sure of is that you have young plants that are quite uncontaminated. Equipment (seed trays, pricking-out trays and pots) should be new or have been disinfected.

Be careful not to over-manure, and keep the salt content of the soil down, for Thielaviopsis basicola thrives in soils with a high content of salts.